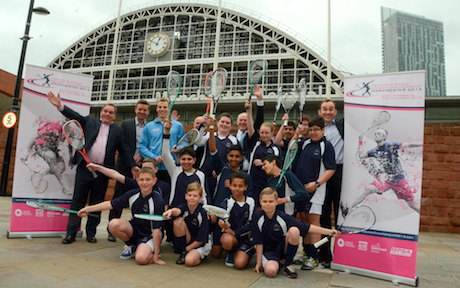 Very exciting news for local squash fans as we learn that Manchester will be hosting the PSA Men’s World Squash Championship for the second time. The tournament will see the top 64 players in the world compete for the title of World Champion. The event which takes place over 9 days, from October 26th to November 3rd, will see the qualifying games played at the National Squash Centre in Sportcity, with the final weekend held at Manchester Central. This comes at a thrilling time for squash as, following previous unsuccessful bids; the sport is in the midst of being considered for the 2020 Olympics. With support from Olympians such as Victoria Pendleton, Roger Federer and Greg Searle, as well as many other sport-stars and celebrities, the ‘Back the Bid 2020’ campaign has helped squash become a leading candidate.

World squash champion Nick Matthew sat down with us to chat about the olympic bid and why Manchester is so great when it comes to sports:

Q: How did you get into playing squash?

A: I got into it through playing at school and for local clubs. I played every sport under the sun and picked the one I liked. I was in my mid-teens when I saw the British Squash Open at Wembley, and thought ‘wow, that’s what I want to do’. I love the one-on-one nature of the game; there is no one to help you, no teammates. I like the challenge, when you are in that confined space and the door closes, there is just you and one other guy and you just have to figure it out. You can’t physically do anything to them, like in boxing, it is more like a game of chess you’re trying to work out. I just love the mental and physical challenge and I remember that from a young age I was always asking myself how I could get better.

Q: In your opinion, what is the likelihood of squash becoming an Olympic sport following the recent bid?

A: I don’t want to say what the likelihood is because I don’t want to tempt fate, but squash has missed out on the last two Olympic bids, 2012 and 2016, and it has just been a hammer blow to the sport. We have learnt lessons and everyone has come together: the Men’s Professional Body; the Women’s Professional Body; England Squash and all the other national federations. The PSA Squash TV is up to par with other sports and now squash is ready, should we get the nod. We are positive the committee know all the efforts that have gone in and that people couldn’t have done any more, the whole squash world has really pulled together.

Q: Squash doesn’t receive the same exposure in the media as some other sports, why do you think this may be?

A: I think there are a lot of sports that don’t get the exposure they deserve and that is why missing out on the London 2012 Olympics was such a blow. For me, the highlight of London 2013 wasn’t necessarily seeing the high profile sports like football or tennis, it was seeing sports that don’t usually get that media coverage benefit from it. I was watching archery, water-polo, volleyball and handball. With squash, it is in the middle ground, there are sports that will always be in the mainstream, it would be unrealistic to try and knock football off its perch. We just have to try and nurture the support we get.

Q: Why do you think Manchester was chosen as the host for the PSA Men’s World Championship?

A: After the Commonwealth Games in 2002, Manchester just became ‘the sporting city’. I’m a Sheffield guy, so Sheffield prides itself on being sporting as well, but Manchester has taken it to that next level. Even just the number of world class events going on this year is amazing, like the NBA pre-season game and the BMX Supercross World Cup.  It isn’t just mainstream sports either. Manchester is amazing at bringing a real cross section of sports together by hosting the games in the city centre. Manchester has it covered across all levels, from grass roots way up to the top of professional sports, and we’re very grateful for what they done. Manchester has become the home of squash in the UK.

Q: You seem to be very enamoured; will you be spending much time in Manchester after the games?

A: Yeh, I always come here. I am here today training with the England Academy squad, so I come to Manchester at least once a week in season and then in the summer I come every 2 weeks, so I train here quite a lot. As we are training so much the nightlife doesn’t really happen for us, but we like to try different restaurants and there are a lot of hungry bodies after a hard day’s training. I like Smoak, but the staple one is going to Wagamama in The Printworks. A Wagamama on just about every corner makes a good city for me. Also, The Alchemist in Spinningfields is a cool bar to relax in.

Q: And finally, how do you relax when you aren’t competing or training?

A: The same as anyone else really, I like to see friends, put my feet up, and watch a movie. I enjoy playing golf from time to time, but mainly just doing nothing.

We wish Nick the best of luck for the World Championship and all his work toward the Olympic bid!

To find out more information and to purchase tickets for the championship events head to: