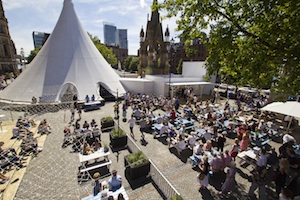 Manchester International Festival got off to an exciting start this weekend with events exploding all over the city. Perfectly timed to coincide with the current heatwave, Festival (Albert) Square is the place to be to snap up last minute tickets from the box office (availability updated daily on a blackboard), sip a strawberry mojito in the sunshine, or mingle with the artists under the shade of the pavilion. 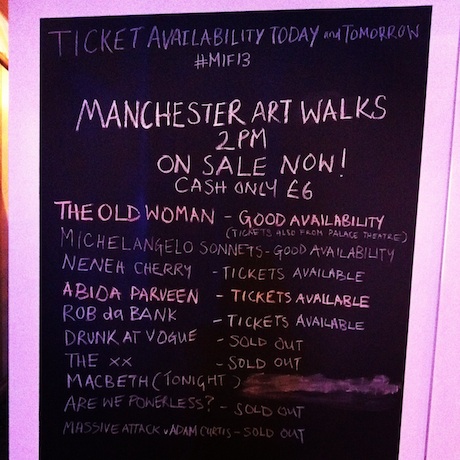 STYLEetc were lucky enough to attend the premiere of Massive Attack V Adam Curtis at Mayfield depot – a disused railway station adjacent to Piccadilly, transformed into a visual and sonic time warp for this performance which takes us on a thought-provoking journey through the last thirty years of culture, politics and social evolution. Or should that be devolution? We’ll let those of you lucky enough to get your hands on a ticket decide for yourselves!!

We also attended the premiere of Do It 20 13 at Manchester Art Gallery. This wonderfully interactive exhibition celebrates the 2Oth anniversary of Hans Ulrich Obrist’s conception: a growing series of instructions, written by artists and interpreted afresh each time they are enacted. Suitable for all ages, viewers can choose to merely observe others following the instructions, or to participate themselves.

At The Whitworth, we saw performance artist Nikhil Chopra begin his Coal on Cotton piece – 65 continuous hours lasting from sunrise on Friday until sunset on Sunday, with the gallery remaining open for the duration.  The piece was devised to explore the connection between ourselves and our forbearers, using these humble materials which brought wealth to Manchester in the 19th century, yet still trap workers in modern slavery in some parts of the world.

Back at Festival Square, Neneh Cherry and RocketNumberNine’s debut in the Pavilion Theatre saw Neneh’s distinctive mellow, yet feisty, tones perfectly blended with the duo’s electronic beats and atmospherics. A captive audience demanded an encore and there were shouts for ‘Buffalo Stance’ but that is not what MIF is about – this festival is only for the new and innovative, looking forwards and not back! The crowd were not left disappointed by the new material, but should Neneh consider a Greatest Hits tour, Manchester will certainly be a sell-out!

We rounded off our MIF13 initiation at Saturday’s Are We Powerless? debate in the stunning, briefly (for MIF) reopened, Albert Hall on Peter Street. An impressive number turned out, despite the almost stifling heat the hall was packed with Manchester residents eager to have their say on whether mass protest could impact the current political and financial climate. BBC presenter Evan Davis led the discussion hearing the views from a panel of experts and then opening up to comments and questions from the audience. A show of hands by the majority claimed we are NOT powerless, but the general consensus was that in order to protest effectively we must first figure out what we want, and that means coming up with an idea that is better than one previously tried, which ignites enough hope in the general public to inspire action.

With another 11 days of MIF left, there’s plenty of time for you to check out some of the action, or simply soak up the atmosphere in Festival Square!

For further information on all events and performances, please visit www.mif.co.uk