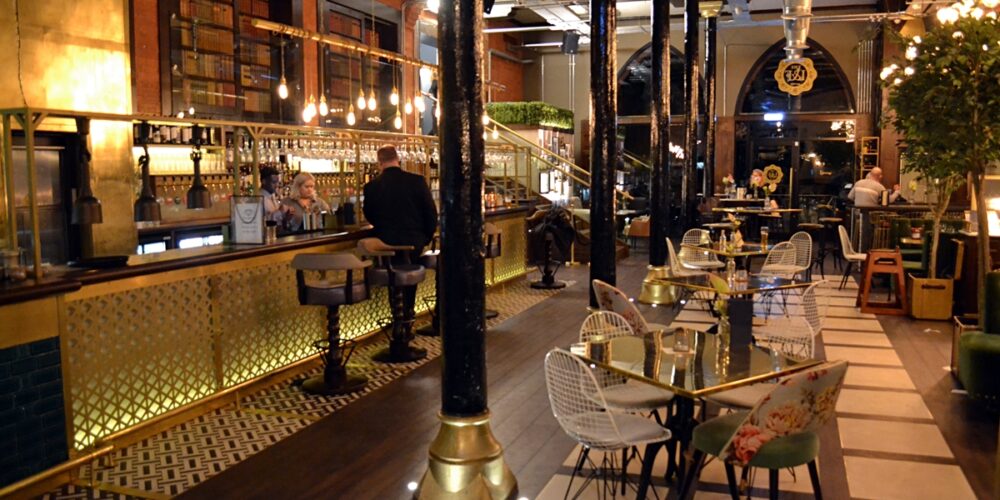 Having previously announced the opening of the much anticipated restaurant and bar on STYLEetc., we were eager to come and sample the hospitality for ourselves post the official opening on 29th September.

Located in a converted Cathedral, the high rise ceilings and aged structures only add to this restaurants charm upon entering. The decor is an eclectic mix, playing up a quirky aesthetic of one off ornaments and jazzy floor tiles juxtaposed with more withstanding original features to create an all-encompassing charming environment. 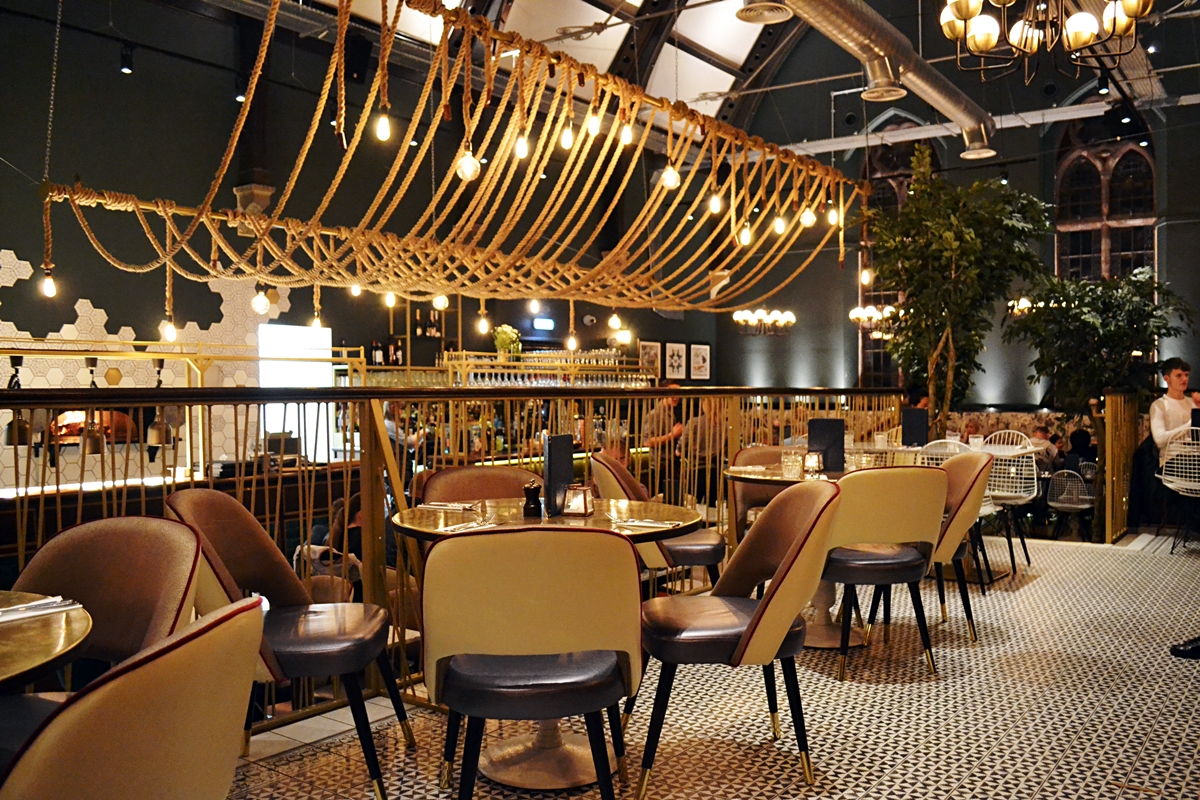 Some vintage style hangings and props are thrown in for good measure, a defunct typewriter here, an old writing desk there, it’s all part of the vibe. Bypassing the bar we were taken upstairs to the main dining area and seated by the window, which was gratefully accompanied by a radiator, a much welcome feature on these cold winter evenings.

Whilst surveying the menu we opted to give the house cocktails a try, sampling the Old Fashioned Cherry Cola, which was satisfyingly received and Ms Stevenson’s Cup, a fruitier affair containing Kraken Spiced Rum with Ginger, Lemon and Vanilla.

Starting off the food to try were our starters, which consisted of my own selection; Josper Glazed Peanut Chicken Skewers, served with Spring Onion, Carrot Roasted Nuts and Satay Sauce. Whilst supple and appetising, this dish could have had a little more oomph in the flavour but did the job all the same.

My guest went for the Pork, Apricot and Hazelnut Terrine, which was embellished with Chutney and Toasted Sourdough for completion. More filling than the aforementioned starter, the Toasted Sourdough addition caters to the hungry diner looking to dive straight in and get their fill for value.

Continuing on to mains, the first selection was a traditional Sunday Dinner, with Chicken being the meat of choice. Traditional and hearty in a pub lunch classics kind of way, this meal didn’t scrimp on portion sizes, chucking in a giant Yorkshire Pudding on top for good measure. The Chicken itself was satisfying, made better with no frills gravy and slightly roasted veg, of which the conventional Cauliflower Cheese was swapped out no fuss for peas at my request. An extra slice of bacon made a tasty little extra to this dish, bringing a comforting british feel that ensured the course went down a treat.

The other main of choice was the not to be missed 10oz USA Rib Eye Steak, promising exceptional quality beef from the States, a USDA grade rib eye. Meatilicious, this dish comes with a choice of chips, adorned with tomato, mushroom and choice of sauce on the side. Cooked to specification, the Steak delighted my guest, who after tackling two courses was stuffed and happy. Marbling on this steak provides not only texture but also great flavour, with an ample cut of meat to appease Steak connoisseurs.

Whilst full from our eating exploits it would be rude to pass on dessert, so we opted to try some sweet dishes for size. The first was the Sticky toffee pudding, fudge, spiced treacle sauce, vanilla pod ice cream, which tasted as good as it sounds. Oh so delicious, with melting ice cream oozing down the sizes beneath a splatter of fudge toppings, this is a dish you won’t want to waste no matter how full. The Spiced Treacle Sauce added an extra kick of flavour, making this choice a winner all round.

The second option was a Chocolate Brownie with Rice Crispie Shard and Vanilla Ice Cream Scoop on top. Taste as well as aesthetically pleasing, this dish adequately met the needs of our chocolate loving expectations. The Rice Krispie Shard adds not only a nice visual element but also lends extra taste to the dessert, jazzing up a conventional dessert with something a little more lively.

Once we had eaten to our hearts and stomachs content, it was time for a final drink before leaving the quaint countryside of Knutsford and trudging back to Manchester. The drink of preference was a Kentucky Peach Smash, a more sour option incorperating Bourbon Whiskey with Peach Bitters, Lemon Sugar and Syrup.

Upon leaving we took it upon ourselves to browse the building, given the inviting nature of the decor. With such eclectic taste, the retro yet timeless aspect to the interior design gives a nostalgic feel that makes you feel at home whilst still adhering to a millenials instagram worthy home standards. Not just equipped with a restaurant, The Lost and Found has a downstairs bar, which was bustling upon our departure.

To see the full menu or enquire visit The Lost and Found Knutsford. 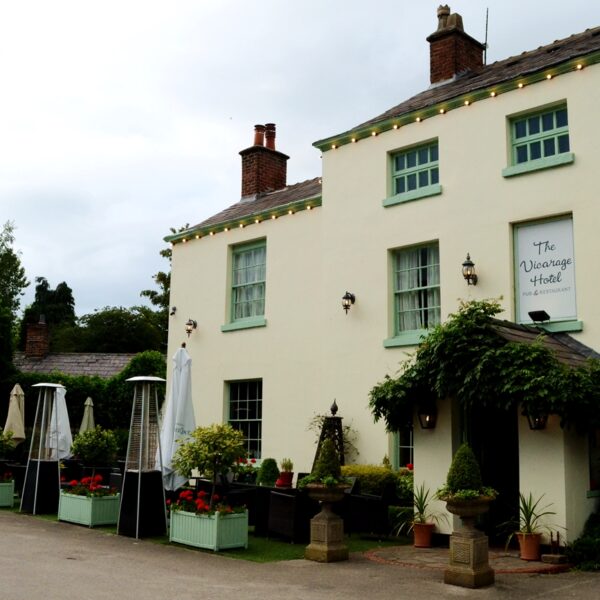 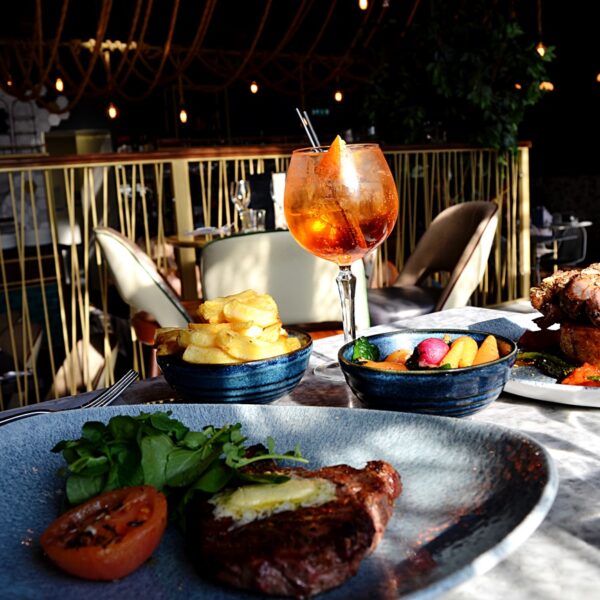 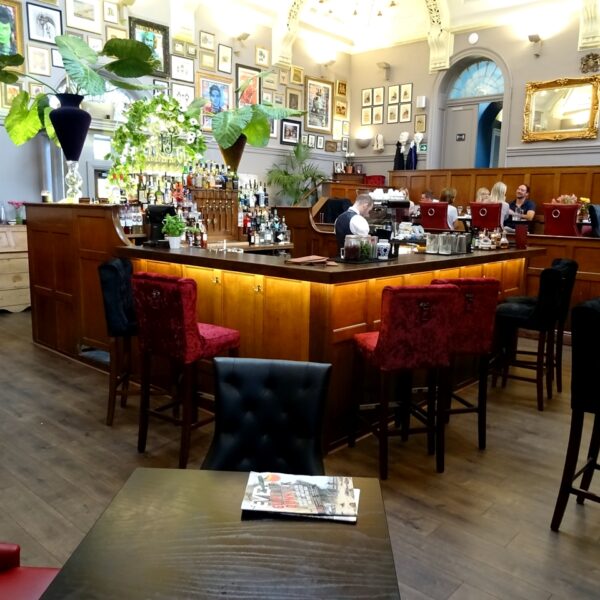