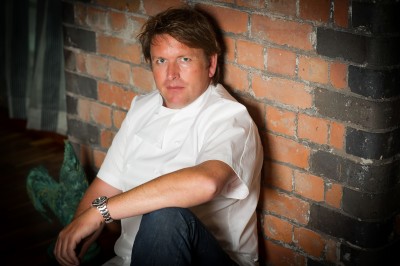 Despite opening his new restaurant James Martin Manchester in Manchester235 casino this September, James Martin is not a gambling man. The celebrity chef, who adorns our screens every weekend on the BBC’s Saturday Kitchen, is confident that he has the right ingredients to make a success out of his new venture and has put a team in place that he believes match his incredibly high standards.

“While I have led the way on James Martin Manchester, I have got an incredible team around me that have helped bring this together,” explained James. “From the décor in the restaurant, to the table linen, and most importantly, our menus, we have all worked together to make what we believe to be the right decisions to make this restaurant successful.”

“At the heart of it all lies the food,” he continued. “I am not a chef who believes in gimmicks. I believe in providing customers with a quality piece of meat or fish, cooked to perfection and served with a fantastic sauce. If we add to that an attractive environment and welcoming staff, customers will leave wanting to come back. That is my aim.”

There’s no denying that James Martin is a busy man. Alongside his regular BBC appearances, James Martin has a new show coming out this Autumn, in which he combines his love of food with his latest hobby; flying. On top of that, he has a new book coming out in time for Christmas and is a regular attendee at car shows, with plans to take part in several races himself. And that’s not to mention his other restaurant, The Talbot in Malton, Yorkshire. So how will he squeeze James Martin Manchester in to that busy schedule of his?

“A lot of people have asked that question,” smiled James. “Believe me, I am not one to put my name to something and leave it at that. I do have a lot on but I still dedicate a lot of time to being in the kitchen. Regardless of everything else, cooking is still my favourite thing to do and I love working the pass, that will never change. I spent several days at The Talbot recently and customers were surprised when they found out I was working. But ultimately, that is what I love doing and will do it as much as my schedule allows. It is the same with James Martin Manchester. I intend to be here as much as I can. And when I am here, I will be turning my phone off, rolling up my sleeves and cooking. 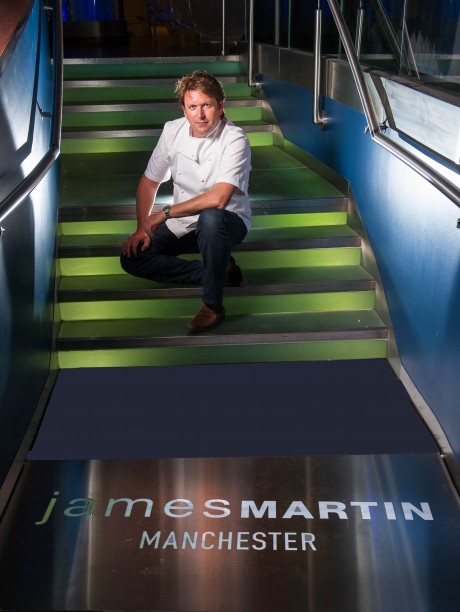 James continued; “I am excited about the menu we’ve put together for James Martin Manchester. The majority of our food has been sourced from within the UK and we have spent months trialling food to make sure we have the best of everything. After all our hard work, the time has come to get the customers in and see what they think!”

This is not James’ first restaurant within a casino. He worked with London Clubs International to open up The Leeds Kitchen at The Alea Casino and believes they got the formula just right. “Having a restaurant within a casino is an interesting concept,” said James. “But I believe we got it right. The numbers in the restaurant week on week will tell you that. Closing down was a sad day but we were an unfortunate victim of circumstance and a lot of our customers have already been in touch to say they plan on following us over the Pennines to Manchester235, which is great to hear.

“I see the Leeds Kitchen very much as Phase 1 and James Martin Manchester is Phase 2. We know what works and what doesn’t. Our Manchester restaurant is much bigger than Leeds, with 120 covers so it does feel like a step up and we believe we will meet the challenge head on.” James is aware that his restaurant is not the only one to open in Manchester in September but rather than be concerned about the competition, he believes they will all benefit from it.

“I spoke to a number of chefs in Manchester before deciding to open here,” said James. “The fact that there a lot of top quality restaurants here with several more due to open doesn’t faze me in the slightest. Giving customers more choice has always proved to be a good thing and I think there is plenty of room for us all. Manchester is a big city and there are a lot of people living and working here. I felt the timing was right for us to be a part of the restaurant scene here and we’ve done a lot in a short space of time to prepare for opening. I believe people are going to be impressed with what they see here, in fact I would advise anyone to phone and make a reservation as we have had a lot of nights booked up already!”

James Martin Manchester opens on Thursday 26th September and will be open 7 days a week, from 5pm until 11pm.

← Vogue Fashion’s Night Out comes to Manchester
Must Have Buys →