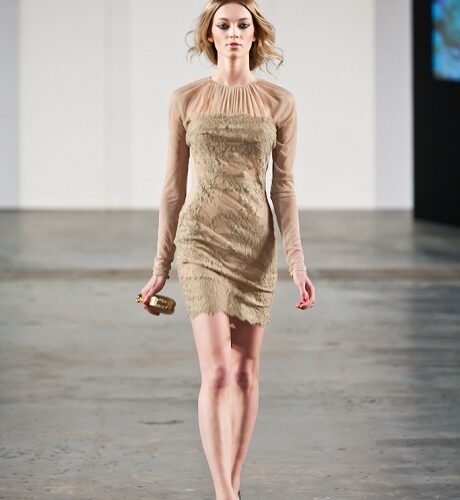 While we have spent the last few weeks drooling over what we are going to be wearing for Autumn/Winter it was nice to be reminded of the ‘here and now’ with Manchester’s fashion event of the season, the Harvey Nichols trend show.

Harvey Nichols never fails to deliver when it comes to picking a fabulous location, and this year was no exception. The team hosted a wonderful champagne reception and show surrounded by the glorious architecture of Campfield Market Hall. The room was filled with Manchester’s fashion savvy, several WAGS and chic shoppers, all with the running order and pens to hand, ready to write their wishlists.

For the ladies there were a variety of looks and the clichéd saying ‘something to suit everyone’ was definitely true in this case. The show started with the ‘pale and interesting’ theme, which showcased this season’s sorbet trend but with a much less ‘girly’ approach than there has been in magazines, giving it a more wearable edge.

Later in the show the models got the opportunity to show off their gym-toned bodies in beautifully vibrant coloured and printed swimwear. There were also some kaftan and jumpsuit options for those of us who aren’t as naturally blessed as the models and require a bit more coverage on the beach.

For the ladies who hate to venture from black there was the ‘grunge glam’ trend, with looks that we could definitely imagine being rocked by the ultra trendy it-girls such as The Olsen Twins and Taylor Momsen. The darkness of this trend was in definite contrast to the beautiful blues and greens seen on the runway for the ‘Under The Sea’ trend. One our favourite looks was a flowing green Lanvin dress, which when teamed Givenchy and McQueen was the ultimate in luxury.

There were quite a few brave trends for the boys. Retro was the order of the day with the ‘Happy Days’ trend giving a nod to the fifties and the ‘London Punk’ trend referencing the eighties. We definitely imagine we will see a few of these looks on the streets of the Northern Quarter over the next few months. Our favourite of these looks was the Nicole Farhi jacket and D&G trousers, which was a real dapper outfit option for a fashion-forward man at work.

For the slightly more bohemian shopper there were some fantastic looks seen on the catwalk for ‘Arab Spring’ trend, which was a refreshing ethnic take on the ever- popular safari trend. The girls won’t be the only ones holidaying in style this year as the boys had the beach look sorted too and it seems that when swimwear is involved, it’s time for men to be brave, with looks that had us blushing, it’s the smaller the better this season.

The final looks were a show-case of Liverpool designer, Philip Armstrong. This is the first season that Philip Armstrong is available at Harvey Nichols and it’s great to see them supporting local talent. It was easy to see why though as the most beautifully detailed, show stopping, final dress swished down the catwalk on the back of the gorgeous Lanie Wilson, leaving jaws on the floor and hands in purses. We wonder which lucky lady managed to bagsy that number.