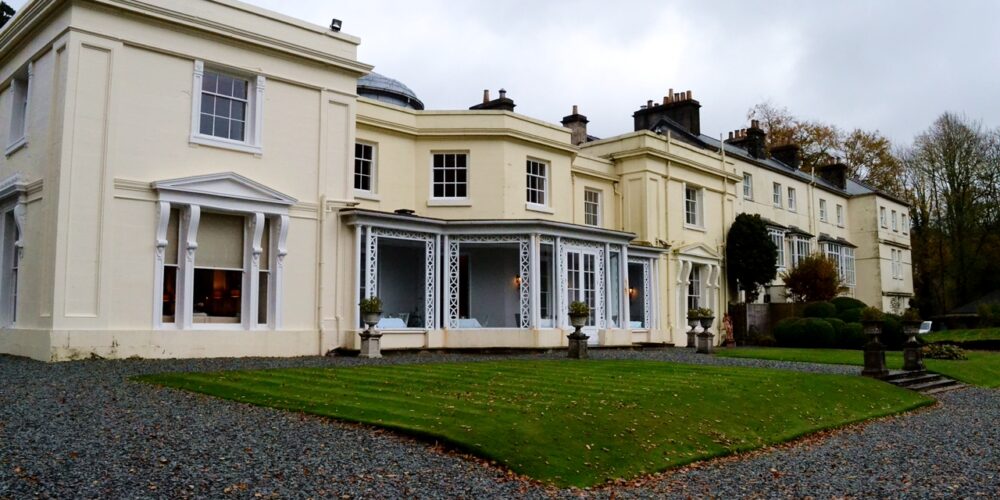 Steeped in heritage Storrs Hall demonstrates notable historic references set beside the Lake District. STYLEetc took a trip this Halloween weekend to see if the experience measured up to the reputation. 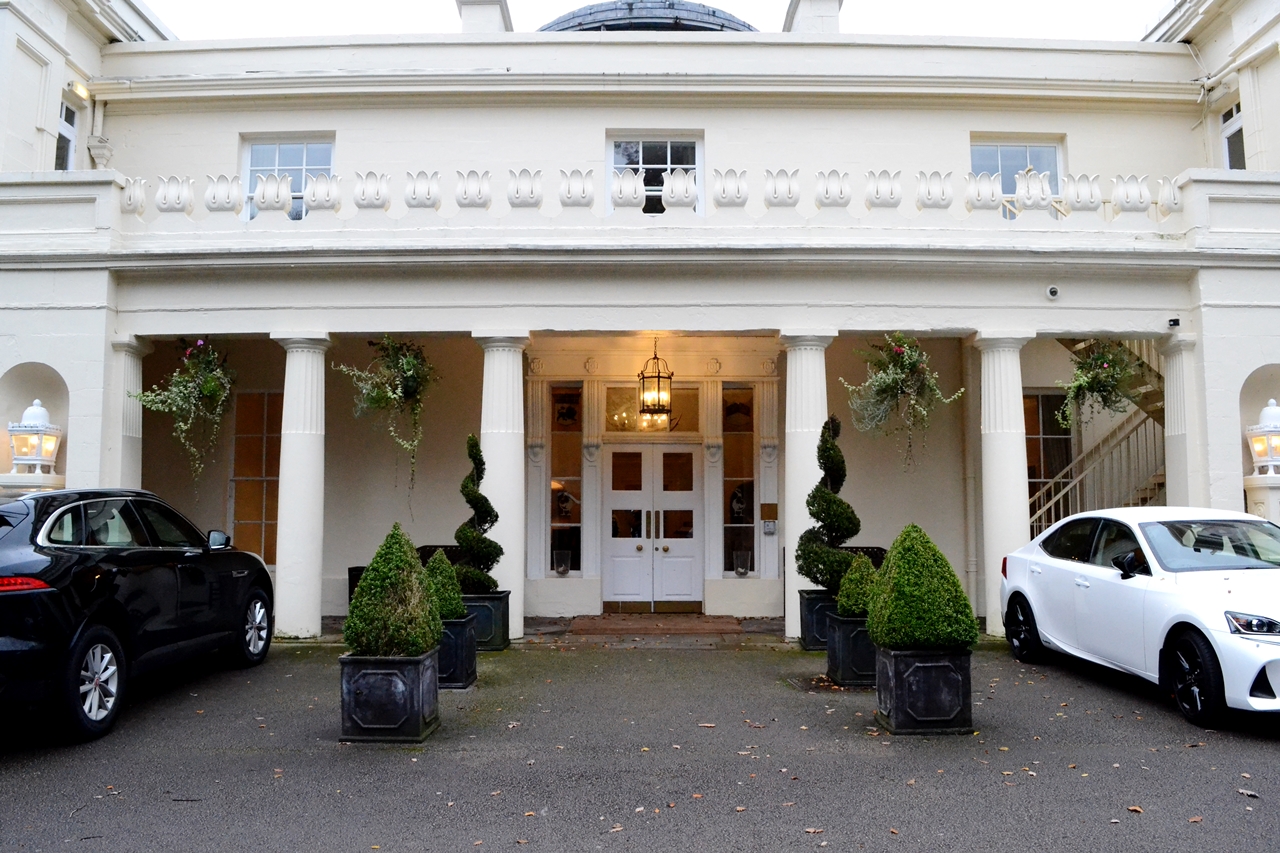 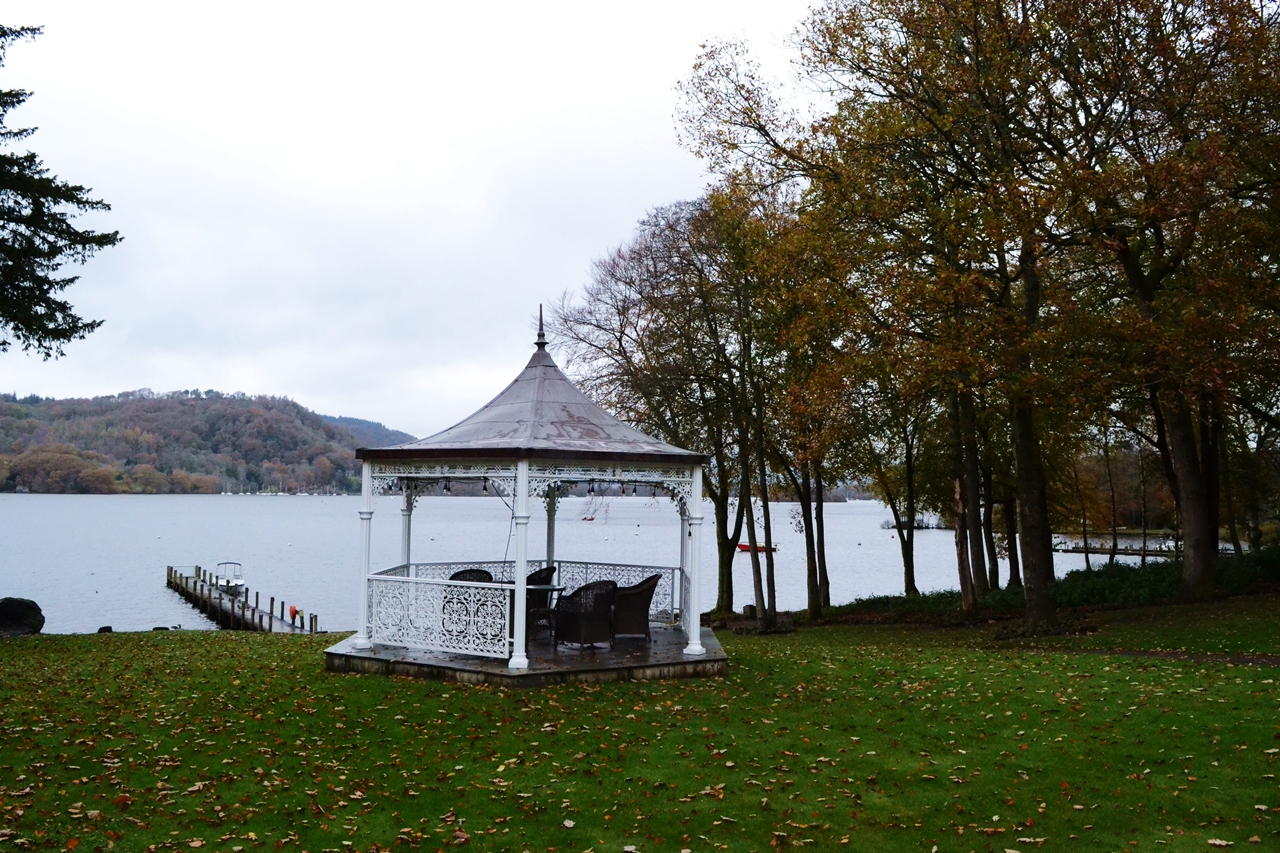 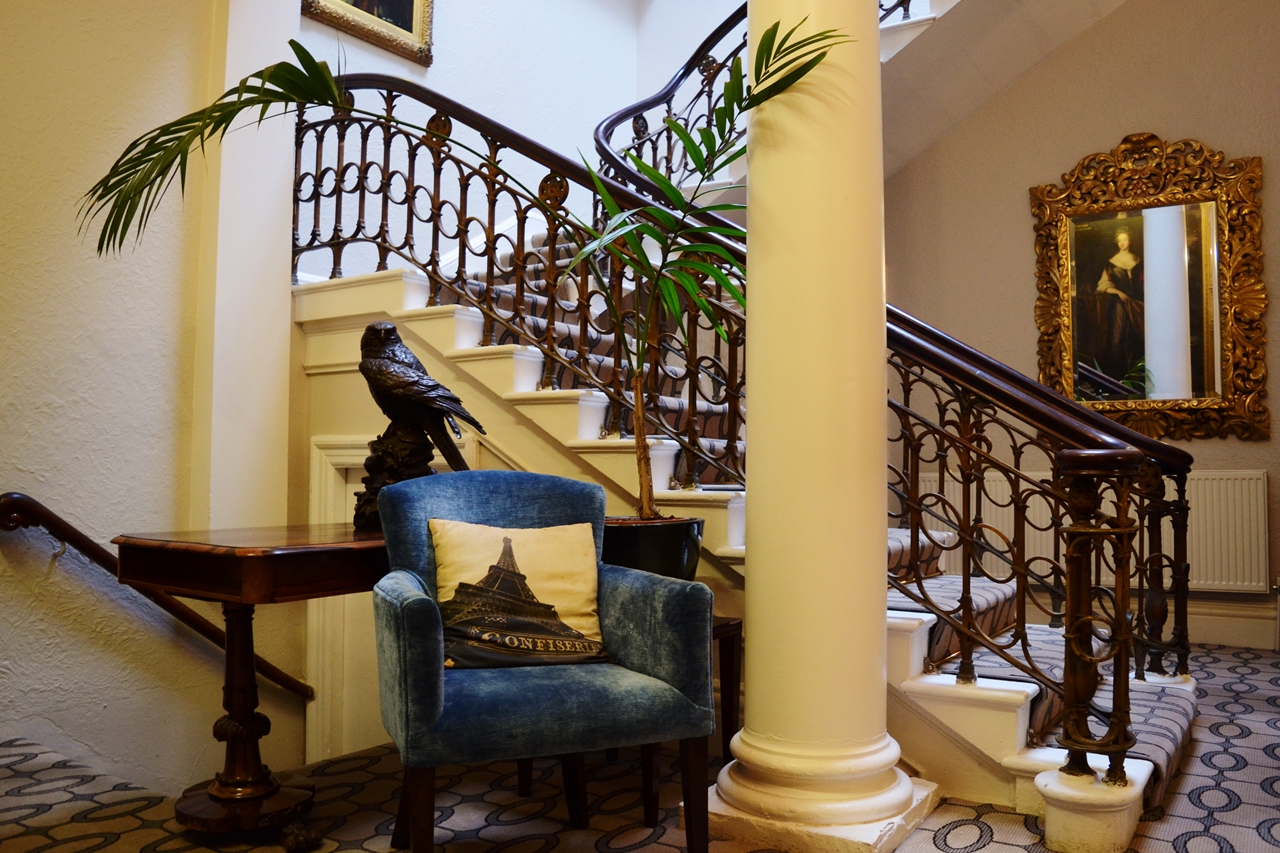 The first thing which strikes attention of Storrs Hall is the building itself. Large and white and located off the country lanes, you’d be forgiven for thinking this venue was secluded away from the Lake Districts main attractions, that is until you turn a corner and see the other side of the hotel gives way to a spectacular view of Lake Windermere.

The inside makes use of classic features, showcasing impressive stairways and tall decorative ceilings. An heir of timelessness is kept about the design, with few updated modern features, discreetly featured for convenience to blend into the furniture. Through the halls, ornate portraits of past British royalty adorn the walls, some stretching from ceiling to floor in size, which really sets the tone for the luxury atmosphere sought. 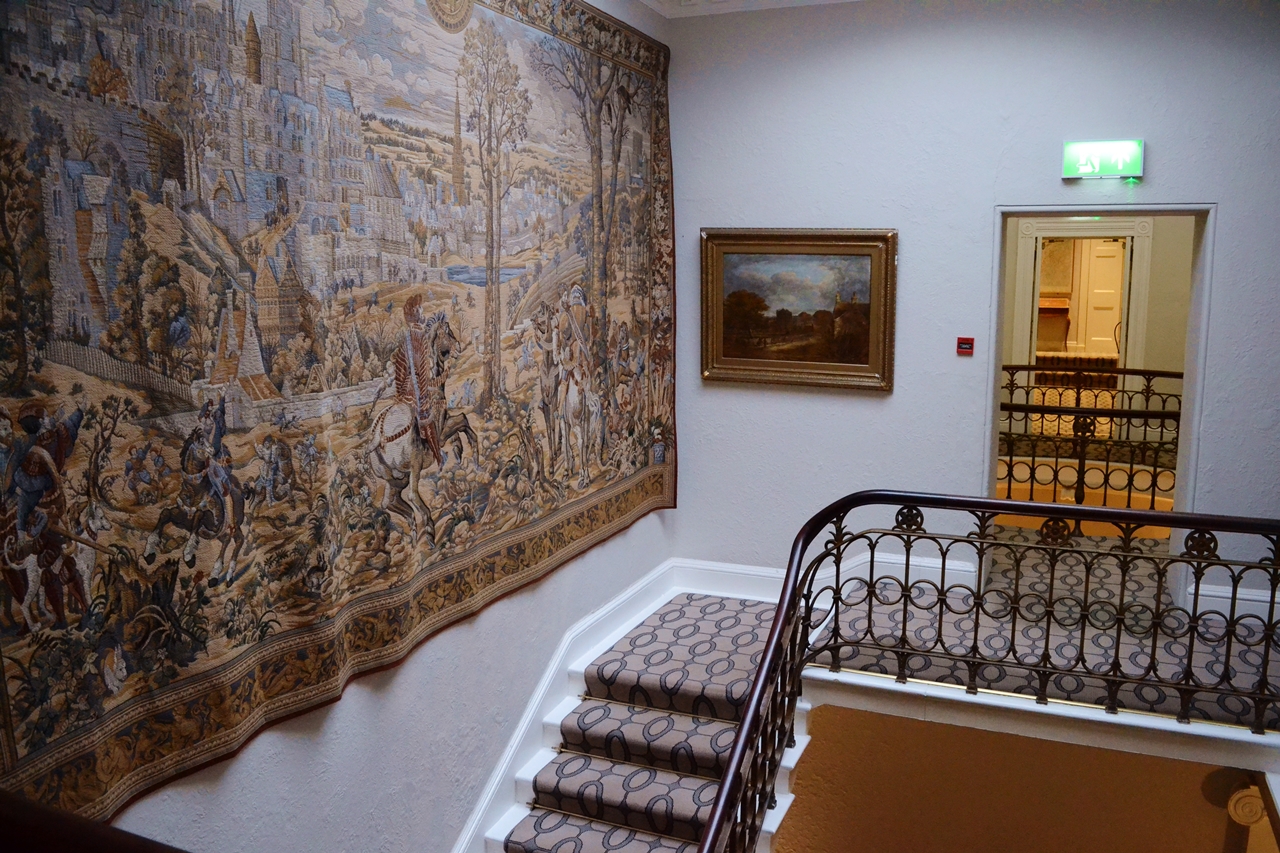 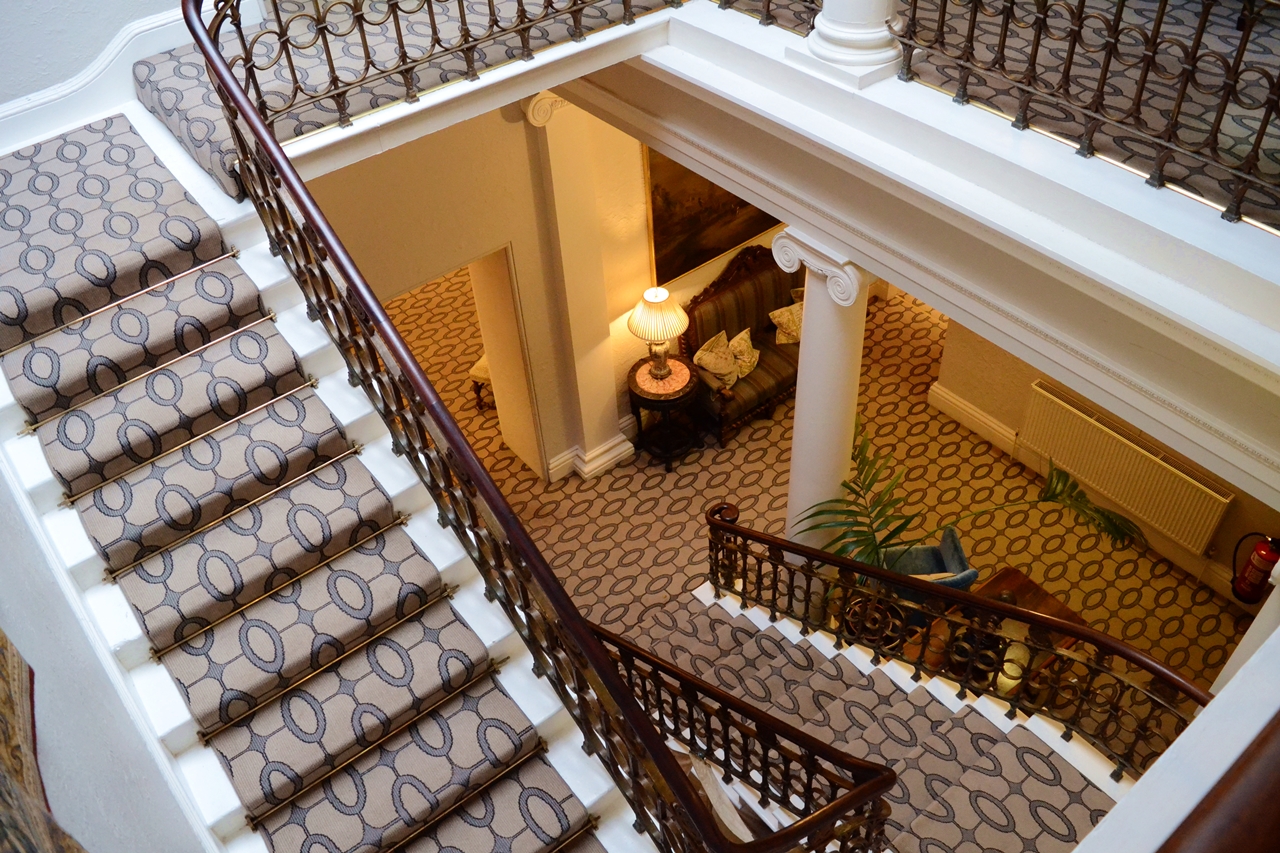 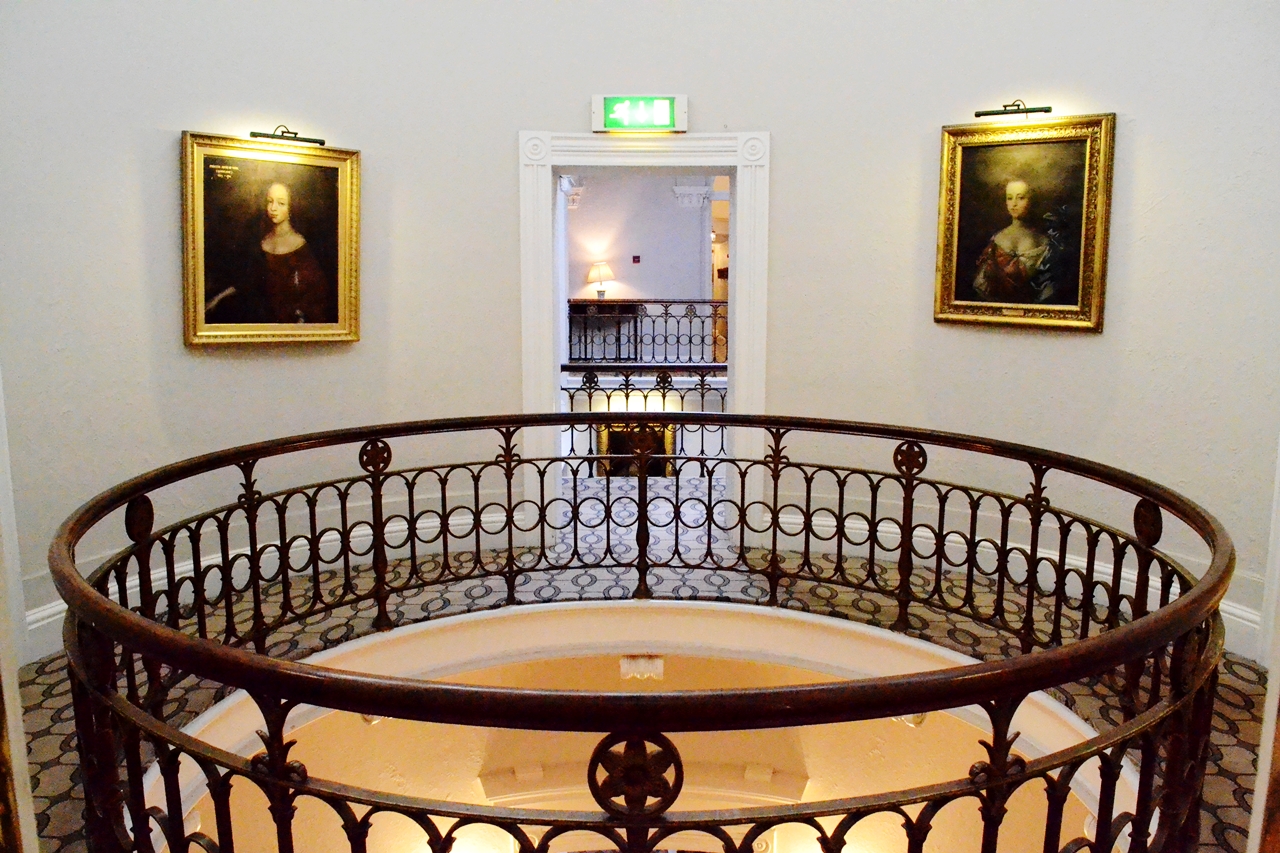 Inside the executive suite sampled, plush textile sofas are offered at the foot of soft, sinkable beds. A comfortable nights sleep is ensured in the king sized sleeper, complete with half a dozen pillows for good measure. A writing desk is also provided, alongside vanity mirror and usual tea and coffee facilities.

It is the view, however, which steals the show away from interior design. In direct positioning of the bed, a large traditional window gives portal to direct vision of Lake Windermere, which on a clear day shows the picturesque hills way off into the distance. Tranquil and enduring, the view makes a delightful sight to wake up to in the mornings. 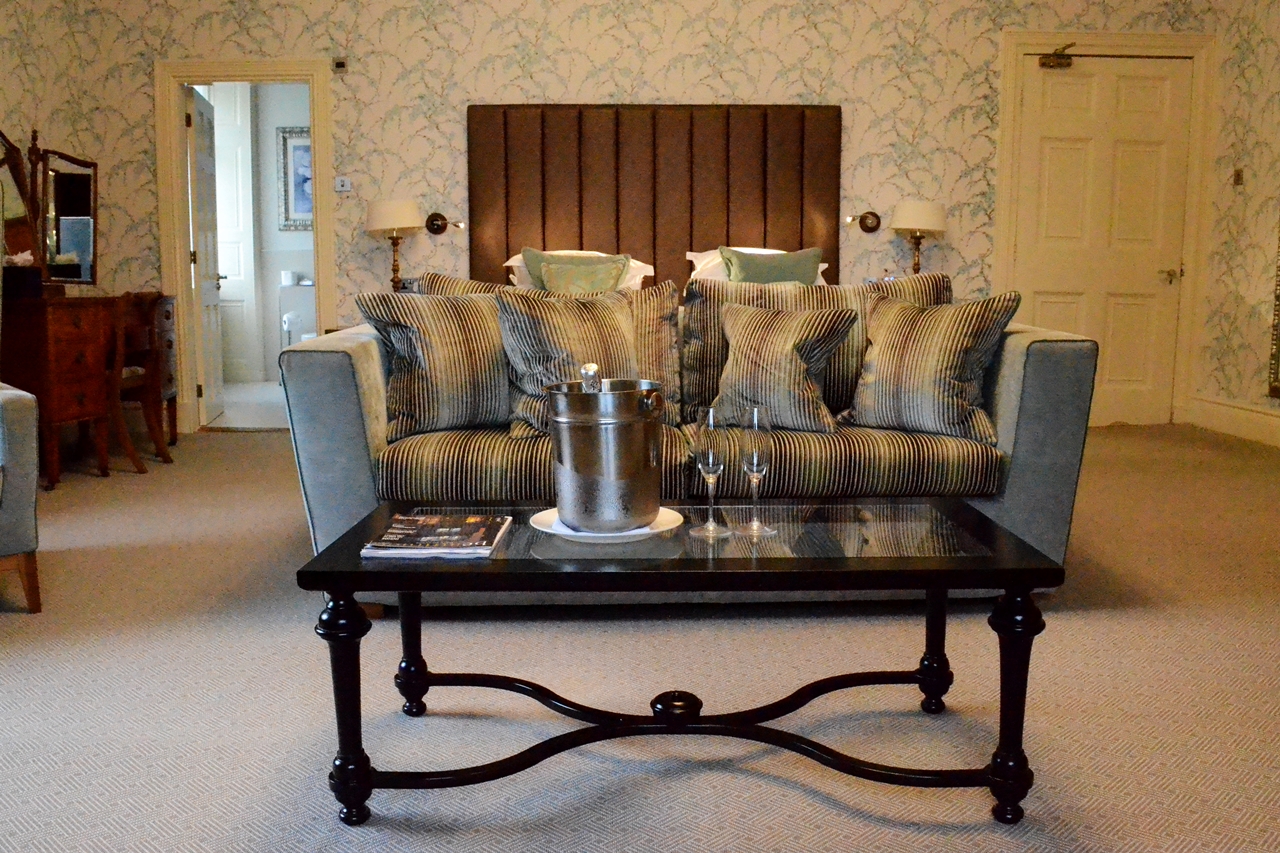 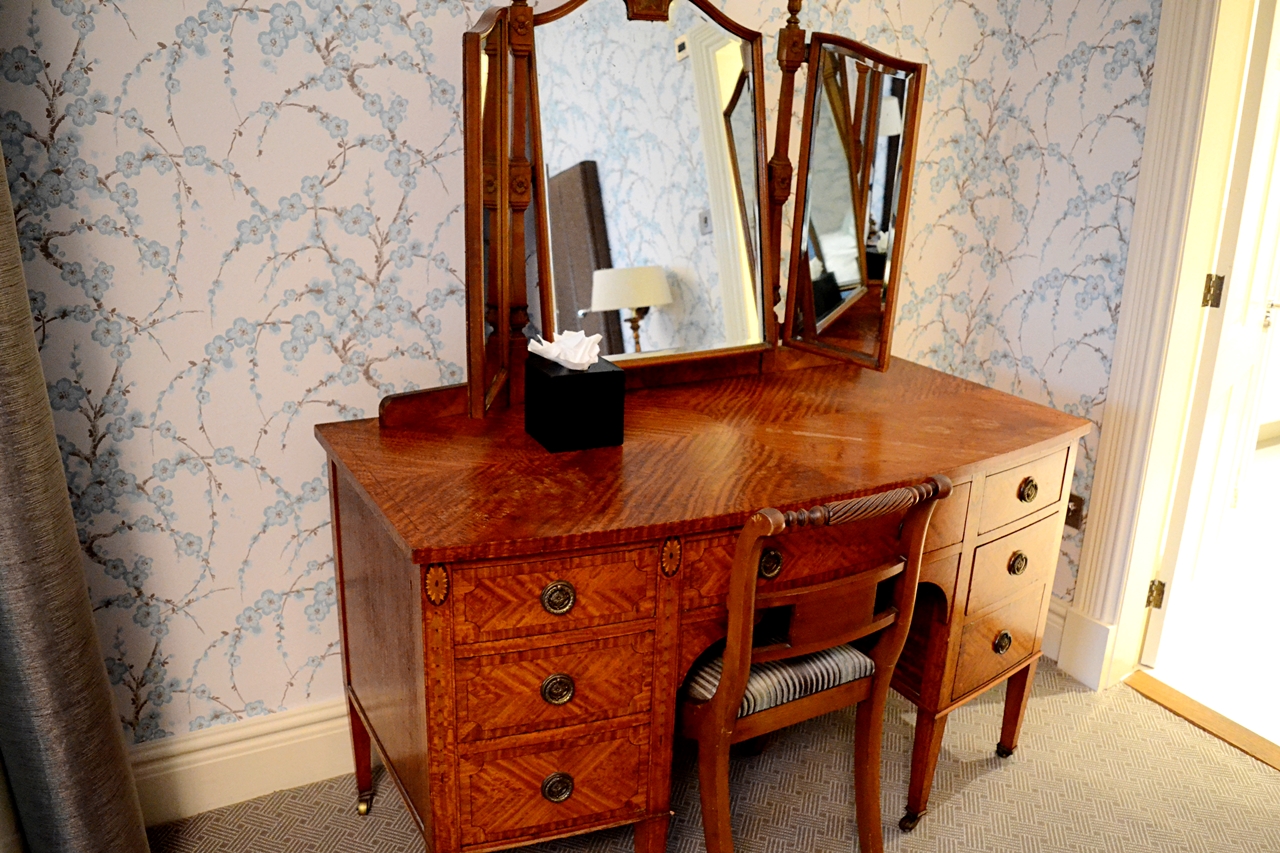 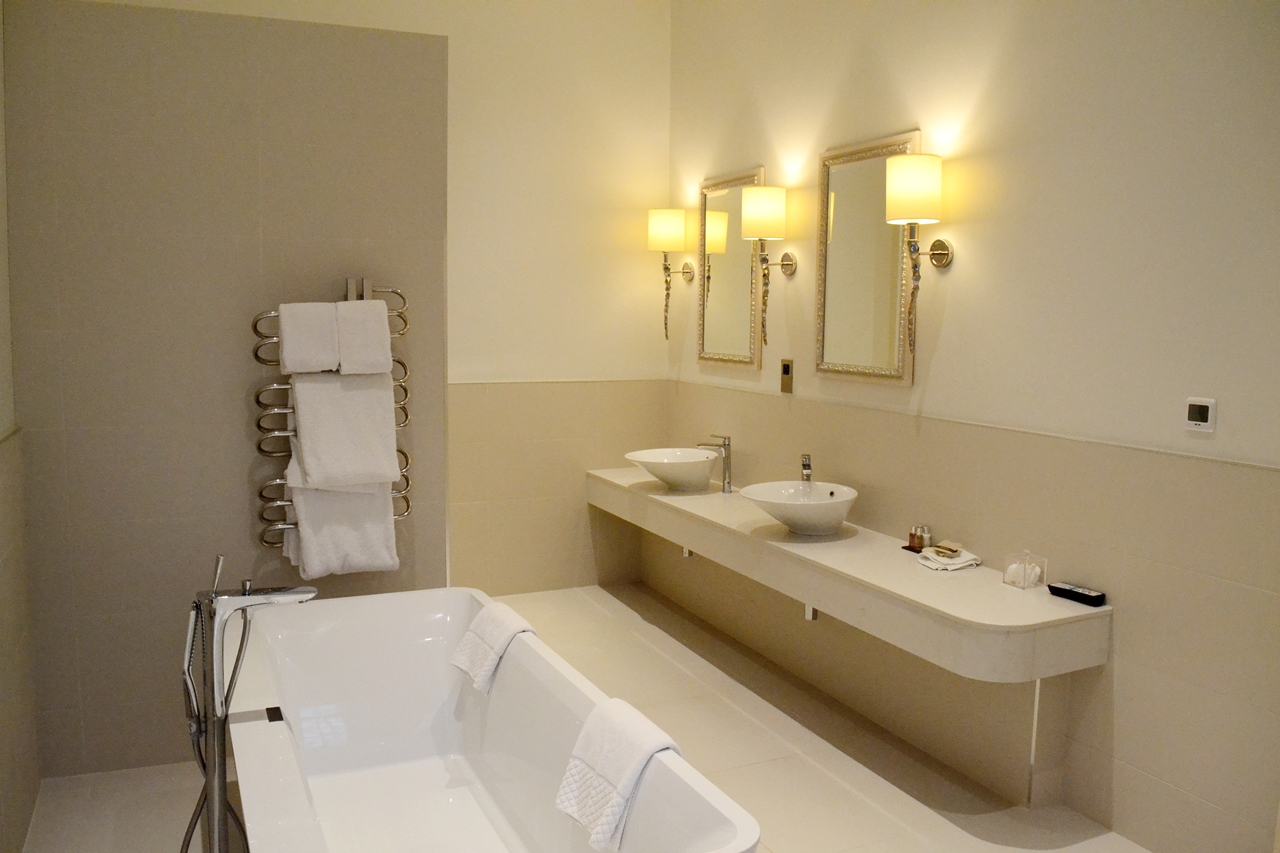 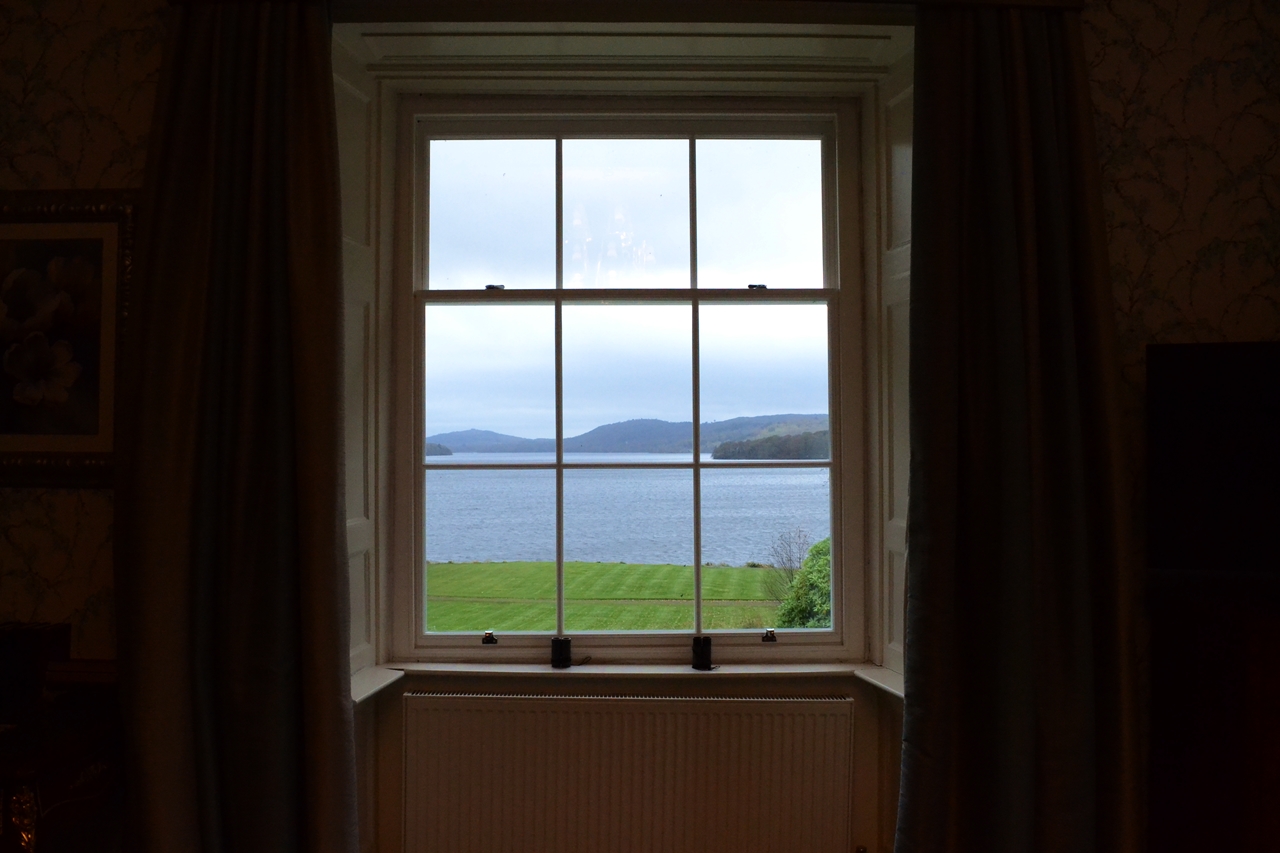 The restaurant hosts a usual set of tables arranging in the dining hall with an additional set of seating with a spectacular lakeside view for those fortunate enough to be seated there. Service was of the upmost quality, befitting of a fine dining establishment. Our waiter was attentive and struck good balance of taking care of us without over-imposing.

Bread was served whilst we awaited starters, with an apertif of Tomato and Oregano soup. The bread was warm and comforting, morishly good to tempt you to indulge before the ordered dishes arrive.

Starters were made up of the Venison, which was served with a smattering of leaves and presented simplistically crisp, and the Rabbit which was soft and brought alongside a varied sampling of sauces and seasonings.

For mains the Lamb and Pigeon were selected. The Lamb typically came with clams and seaweed which wasn’t quite to preference but the staff were happy enough to swap out the clams for seasonal vegetables with some buttered potatoes on the side. The Lamb was delectably prepared, not too bloody but oh so tender and beautifully accompanied with the addition of the melt in the mouth potatoes and softly cooked veg.

The Pigeon brought a more unusual twist to the evening menu, served alongside popcorn  and pearl barley, giving a texture which was crisp on the outside yet chewy on the inside. This was served with additionally ordered chips for heightened flavours, the chips also did not disappoint as they were found to be fluffy and light with just the right amount of crunch.

Between dishes we were served a palette cleansing Creme Brulee, this brought a nice touch and was well received before desserts. The desserts themselves were dainty and gorgeously presented.

The Chocolate dessert was decorated with a slither of mango sauce, cooked with praline and presented in a mousse-like texture with dark chocolate sauce and flakes on the side. A classic which will do what is promises, it does not leave disappointment. Likewise, the other final dish; the Mango option gave fruity flavours which was served with a small coconut rice pudding ball to absorb and complement stronger tastes.

After dinner set the bar high, anticipation was high for breakfast the following day. A range of hot and cold options were served ready to collect, alongside tea, coffee and juices.

There were plentiful supplies of cereal, pastries and toast but the cooked breakfast was slightly withheld. A single slice of bacon and a lone sausage was offered, lacking the usual presence of beans which from a personal perspective dampened the flavour somewhat. The other items were more than satisfactory but could have been bettered with a little more offering on the cooked breakfast front.

A home away from home, the stay at Storrs Hall offered a comforting staycation break which brought excellent access to the Lake itself whilst being remote enough to stay tranquil and separate from the busy tourist hustle and bustle. The grounds give way to a jetty and paths which take you to a small temple, which is a little piece of local history in itself. For the luxury aspect it is clear all needs are catered to and service is provided upon a whim, which elevates the venue as a prime choice for weddings and special occasions as well as the usual ‘treat yourself’ break. 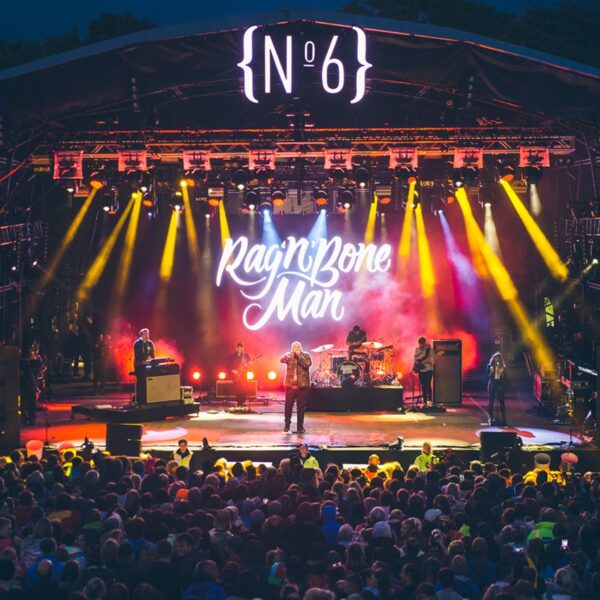